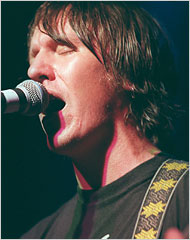 Elliott Smith, whose songs of despair and self-doubt made him a luminary of independent rock and earned him an Academy Award nomination, died at the age of 34 from knife wounds that might have been self inflicted.

Mr. Smith reached his largest audience when he performed ''Miss Misery,'' the song he wrote for ''Good Will Hunting,'' on the Academy Awards telecast in 1998. But for much of the 1990's, he was widely heard on college radio stations and on the club circuit, where he was admired for his delicately harrowing songs and, on his first albums, for the intimacy of his recordings.

In his songs, he wrote about drug abuse, failing relationships, betrayals and occasional glimmers of hope. His sense of melody harked back to the Beatles and to folk-rock, but within the understated settings were bleak stories of turmoil, addiction, domestic violence and despair.

Elliott Smith's real name was Steven Paul Smith. He was born in Omaha and grew up in Dallas and in Portland, Ore. He began writing songs as a teenager. He also started calling himself Elliott because, he once said, Steve Smith was too alliterative and Steve sounded too ''jockish.'' — Jon Pareles

Read the full obituary
Highlights From the Archives
New CD; 'From a Basement on the Hill,' Elliott Smith
By JON PARELES

Elliott Smith sounded like a ghost while he was alive. When he sang about self-doubt, betrayal and addiction in his neatly wrought tunes, there was always a whiff of cold air blowing through his voice.

People come to New York to be found or to be lost. Elliott Smith came to Brooklyn for a little of both.

Elliott Smith was remarkably comfortable on Wednesday night at Irving Plaza, leading his high-kicking rock band through the first of three sold-out performances.

May 23, 2000ARTSREVIEW
Sounds of Comfort for the Collegiate Set
By JON PARELES

Elliott Smith has been performing for the last few years alone with his acoustic guitar, singing in a quiet, wispy voice. But he is no folk singer; he is, instead, a pop craftsman who rethinks structure with every song.

October 5, 1998ARTSREVIEW
Facing What His Characters Probably Never Will: Success
By BEN RATLIFF

''Everybody's dying just to get the disease,'' sang Elliott Smith about the perils of fame in ''Pictures of Me,'' one of the most memorable pop songs of last year.

From Liverpool in the 50's to Detroit in the 90's where would rock history be without economic rot and asphyxiating boredom?

Mr. Smith's last album contains some of the most despondent and prophetic songs of a career full of them.

Singer and songwriter Elliott Smith is found dead at his home in Los Angeles, apparently of self-inflicted stab wound; achieved fame during his years working in Brooklyn, but kept obscure, low profile; photo

Elliott Smith, whose songs of despair and self-doubt made him luminary of independent rock and earned him Academy Award nomination, dies of apparent self-inflicted stab wound at age 34; photo

May 23, 2000
MORE ON ELLIOTT SMITH AND: MUSIC, REVIEWS
POP REVIEW; Sounds of Comfort for the Collegiate Set
By JON PARELES

October 5, 1998
MORE ON ELLIOTT SMITH AND: MUSIC, REVIEWS, QUASI
Facing What His Characters Probably Never Will: Success
By BEN RATLIFF

Singer-songwriter Elliott Smith, whose pop song Pictures of Me was 1997 hit, comments on his success; photo

August 23, 1998
MORE ON ELLIOTT SMITH AND: MUSIC
A Minimalist Approach With Maximum Results
By BEN RATLIFF